The founder of the Blackout Coalition, organizer of #Blackout Day 2020, is facing backlash after posting a series of Facebook live videos last week that appeared to urge blacks against voting.

Calvin Martyr posted a short message last week in his Blackout Coalition Facebook group with a caption reading "You can be distracted if you want to and believe that voting for either one of these men will change things for us as descendants of slaves in America. The path to liberation does not lead to the voting booth... Ownership, equity, self-sustainment, and self-determination is the only hope for our children to have a future and our legacies to remain."

Martyr then created another video challenging his viewers to a debate on the topic, which seemed to rub supporters the wrong way.

A massive trail of angry reactions followed with many commenters accusing Martyr of using his platform to suppress black voting and questioning his motives for forming the group.

"It's a huge disappointment to hear this out of this group", wrote Tony Conley of Cleveland, OH. "Your words are helping to hurt our community and not in any way helping. Your 'do nothing' mindset will keep leading us to our deaths by inaction".

Celestine Izuakonaobi also expressed frustration and disappointment with Martyr's messages regarding voting, "Calvin has been able to get 1.8 million people in this group. We have a unique opportunity to push voting and voter registration to encourage people to vote, and today I heard the young man downplay the importance of voting. That in itself is dangerous. It was absolutely disappointing." 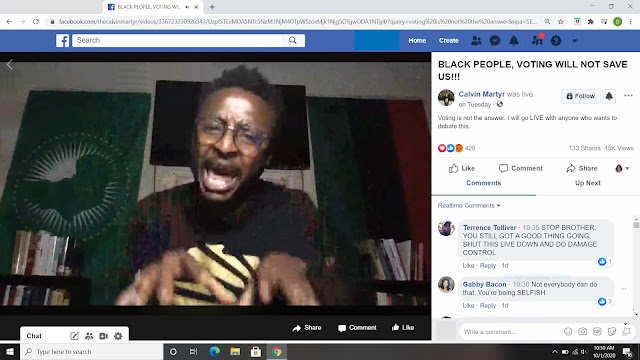 Four women affiliated with the coalition defended Martyr, stating that his comments were misinterpreted. "I think it was misconstrued when Calvin was on live", said one group administrator who goes by the Facebook name ShaSha Jade. "People took it as him saying don't vote at all. He was saying if you choose to vote... vote, but that's not our fight. Our fight is the economic withdrawal and economic empowerment of our people."

The Blackout Coalition, which describes itself as the fastest growing, pro solution, non-violent, anti-rioting, social injustice consequence movement founded Blackout Day 2020, an economic boycott urging blacks to refrain from spending money with any businesses other than those that were black-owned.

Jade says the event was a huge success, resulting in over 40,000 new accounts at black-owned banks with over $50 million being deposited.

Jade says she would like to see another social media group rise up with a focus on voting in the black community.

Izuakonaobi has since formed the Committed Black Voters Coalition group on Facebook.