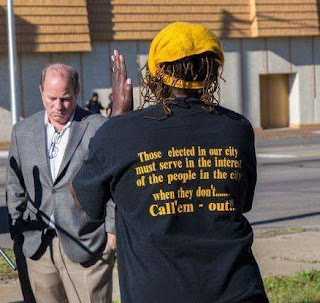 (Detroit, MI) – It was standing room only at the Considine Recreation Center in Detroit on Thursday as local residents packed the house seeking information regarding the City of Detroit's illegally imposed tax assessments.

Agnes Hitchcock, founder of Detroit based Call ‘Em Out, a community advocacy organization, called the meeting to formalize demands that Detroiters be “made whole” after illegal property tax assessments in excess of six-hundred million dollars.

“We have a list of over 2,000 Detroit homeowners that have called us whose properties have been over assessed with many facing foreclosure", said Hitchcock. "These illegal inflated assessments have placed Detroiters in unprecedented peril".

“Majority Detroit has been treated as if it were a plantation for too long", said Riddle. "This meeting is the first step by Majority Detroit to inflict itself on a Detroit that has placed us on the backburner of justice. We can’t take this final insult that has cost too many their very last refuge – their homes”.

The Detroit News broke the story in early January, revealing results of an ongoing news investigation.

According to the article, Detroit Mayor Mike Duggan says the city is unable to correct the problem.
Meeting organizers disagree with the mayor and says city residents won't be made whole without a fight.

Entry into Wednesday's meeting had to be halted due to the overwhelming turnout.

"Sometimes you can be part of something that is very historical and be very unaware of it", said Riddle. "Detroit has not seen a room filled with this type of energy in years."

Hitchcock is asking Detroiters to tune in to 910 AM Monday morning, starting at 9 a.m. for details on an action that will take place Tuesday, January 28th.

The Pulse Institute has launched a series of public policy forums to address solutions. Riddle will appear as a panelist for the first forum, which will take place Wednesday, Jan. 29, 6 - 8 pm at the downtown campus of Wayne County Community College District.