Barbara Jones never imagined a day when she would not be able to hug her child, hear his voice, or see his beaming smile, but just over a year ago, twenty-four-year-old Conte Smith-El was taken from her in a senseless act of violence.

The grief is still fresh. The thought - still difficult to process. Yet, in spite of her tragic loss, Jones has found strength to give, creating a Wayne State University scholarship in her son’s name.

Jones remembers her son as a kind-spirited young man, who had been diagnosed with special needs as a child. Growing up in school, he sought to befriend others, but his kind gestures were often rebuffed.
"The bullying started in middle school", said Jones. "The older he got, the worse it became."

In Conte's freshman year of high school in Detroit, he was attacked by a group of outsiders who invaded the school terrorizing students, and singling him out as an easy target.

Conte’ was attacked at the time and ended up in a hospital emergency room.

Horrified by the incident, Jones says she took steps to protect him by enrolling him in a new school, but the bullying continued.

That's when Jones decided to make a major career change. She returned to school to study conflict resolution, with the goal of advocating for her son, and educate other youth in peace education.

After Conte' graduated high school, Jones once again felt a change of environment would be good for her son who was by then, becoming a young man.

She suggested he relocate to Colorado Springs where his sister Charmaine Jones had been living since leaving Detroit.

Conte’ agreed, and Jones planned to soon join him in relocating.

With Conte’ in a different environment, Jones felt she could rest easier, but the events that soon unfolded were unlike anything any parent could have ever fathom.

As Jones went about her work day at Wayne State University, she received a phone call.

A young man had been found shot and killed in an armed robbery at his workplace in Colorado Springs. It was Conte'.

“It felt as if I had been stabbed in the heart”, said Jones.

Jones says the news was so overwhelming that she instantly rose from her chair and announced her resignation from working in conflict resolution.

In light of her son's tragedy, she felt defeated, as if all her work have been in vain.

Jones’ boss encouraged her to take the time off that she needed, but to not give up her mission of spreading peace to a generation.

"My faith has been tested", said Jones, "But my strength lies in Jesus… just to even want to wake up and put my feet on the floor."

Upon learning details of her son's death, Jones was made aware that he was robbed and killed while working in an unlicensed cannabis shop.

“Conte’ just wanted to work, and he was having a hard time finding work”, said Jones. "I feel my son was taken advantage of by this business owner."

Jones has been traveling back and forth to Colorado to attend court proceedings in pursuit of justice.
At home, she has made a decision to continue her work in conflict resolution. With the help of her daughter Charmaine, and friends at the WSU Center for peace and conflict studies, Jones created the annual Conte' Emanuel Smith-El scholarship.

Conte's scholarship is the first in the history of the WSU Center for Peace and Conflict Studies to honor the memory of a young African-American.

Jones is reaching out to others who are interested in supporting her mission by donating to the scholarship fund.

The first award will be disbursed Fall 2019. 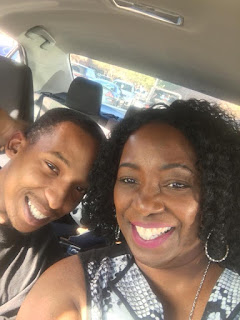